When asked for the names of the best Canadian authors, names such as Nobel Prize winner Alice Munro, Booker Prize winner Joseph Boyden and Arthur C. Clarke Award winner Margaret Atwood come to mind. Popular “best of” lists like those of the CBC and the Literary Review of Canada are similarly packed with classic and important works like Mordechai Richler’s Barney’s Version, Stephen Leacock’s Sunshine Sketches of a Little Town and Timothy Findley’s The Wars. But are these the Canadian books, and authors, that people actually enjoy reading the most?

Rather than ask the critics, we wanted to create a list that reflects the tastes of the reader. Similar to our previous ranking of the best Canadian movies, we set out to find what Canadian books people actually love to read. To do this, we compiled the ratings and reviews of every listed Canadian book on the most popular online reading community, Goodreads.com; we created a weighted ranking, taking into account both the book’s number of reviews and average rating. The result is a ranking that attempts to reflect the best Canadian books, as viewed by the average reader. 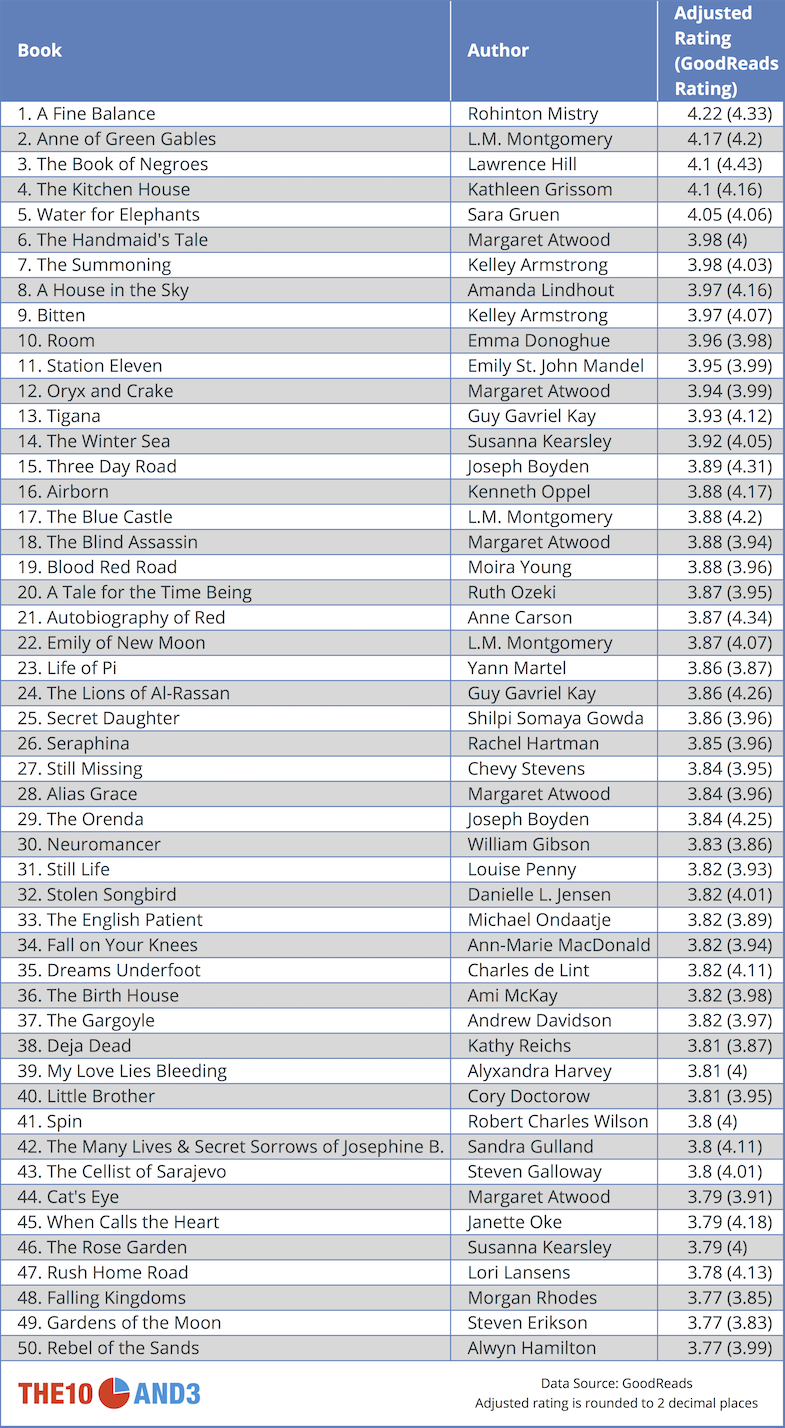 The top ten Canadian books are all quite different, in many ways reflecting Canada itself. Speaking to Canada’s openness and diversity, the Canadian book most beloved by Goodreads voters, A Fine Balance, is written by a first generation Canadian about struggles in his homeland. Second on the list is perhaps Canada’s most iconic book, Anne of Green Gables, representing classic Canadian culture and setting. Third is The Book of Negroes, telling the chilling tale of slavery and hardships faced by black people in our country’s early history. Rounding out the top ten are books ranging from historical dramas to dystopian fiction, catering to the entire spectrum of Canadian readers.

To little surprise, Margaret Atwood is the best represented author on our list, with five novels. Other repeat authors include Susanna Kearsley, L.M. Montgomery, Kelley Armstrong, Joseph Boyden and Guy Gavriel Kay. The two most frequently rated Canadian books on the list are Life of Pi and Water For Elephants, having being read and reviewed on Goodreads over 1.3 million times each. The next most popular books are The Handmaid’s Tale, Room, and Anne of Green Gables, which have all been read and reviewed more than 600,000 times.

The books on our list span over 108 years of Canadian literature, ranging from Anne of Green Gables written in 1908, to the brand new Rebel of The Sands by Alwyn Hamilton, from 2016. The median publication year for books on our list is 2005. This result is hardly surprising; the Goodreads audience skews young, and the site was only founded in 2006, so books written before this would need to be retroactively added. However, as time progresses and society moves forward, older books are not only read less frequently, but hold less meaning to the current audience.

In total, 34 of the 50 books on our list were written by female authors. This represents a departure from other Canadian best-of lists such as the CBC’s ranking of the top 100 books, where only 50% of the works were written by female writers. The women’s literary organization VIDA argues that the majority of reviewers for prominent literary publications are male, thereby potentially biasing best sellers list and critical rankings towards books written by male authors. A competing hypothesis for this discrepancy is offered by Goodreads, based on an analysis of their own rating data: both women and men on the site tend to rate books authored by women higher than those authored by men.

Goodreads data was gathered in April 2016. Ratings on Goodreads are assigned on a 1-5 scale, and can be submitted by anyone with an account on the site. To qualify for our list, the author must either have Canadian citizenship, or have lived much of their life in Canada.

The rankings were created using a Bayesian rating formula, the same one used by IMDB for the IMDB top 250 – and our ranking of the best Canadian movies.

For books that are part of a series, we have chosen to only rank the first book. Sequels are likely to have only been read by people who enjoyed the first book, thus skewing their ratings, as all readers are already predisposed to liking the book. We also have chosen to exclude romance and erotica novels from our list for a similar reason. Goodreads has a very large and dedicated audience of erotica and romance readers. Similar to sequels, books in these genres are often avoided by most other readers, and consequently, receive an inflated Goodreads rating.