Google’s Autocomplete feature was born with the purpose of making search a little bit faster, and maybe a little bit more fun. Type in a few words or even just a character or two, and Google will suggest the most common completions of that query. Sure, it can save you a few keystrokes when you’re looking for the name of that nearby burrito shop. But isn’t the real point of this crowd-sourced sociological treasure trove to discover what weird and wonderful things people are searching for?

This article is the first in our Searching Canada series where we explore public search data to understand what Canadians really think about their country, their city, and themselves. Today, we tackle the question of what baffles Canadians most about their provinces and cities, by offering Google the prompt “Why does [place name]” and seeing what Autocomplete tells us most users type next. 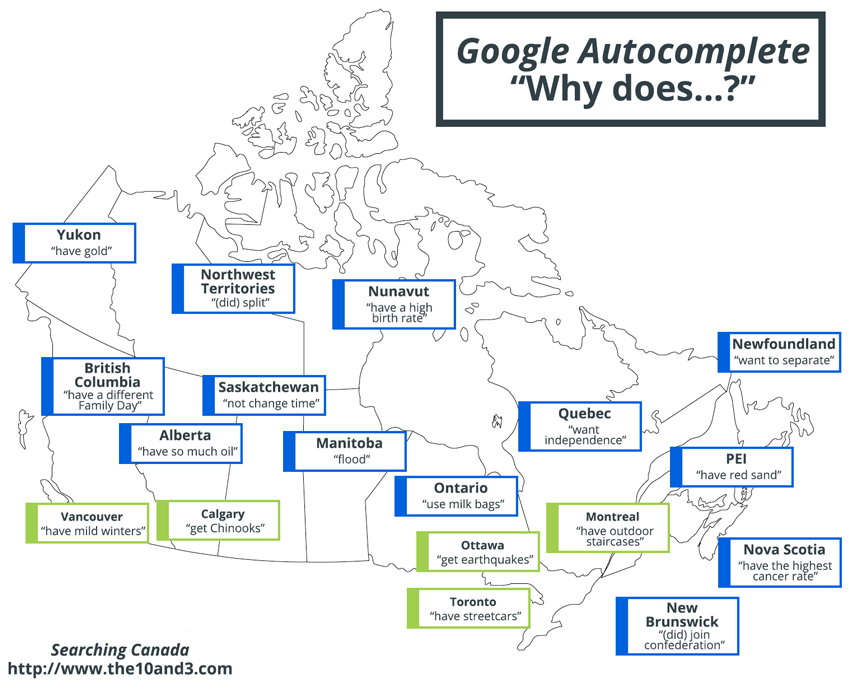 So what vexes Canadians most about their provinces and cities? For many places, it’s the weather and local geological phenomena (Alberta, PEI, Yukon); for others, it’s the fear of separation (Quebec, Newfoundland and Northwest Territories); and still others, it’s the sometimes bizarre quirks of a place that can befuddle even long-time residents (Saskatchewan and Ontario).

Canada is rightly known for its magnificent physical beauty, vast territory and remarkable climate diversity, and Canadians are hitting their keyboards to better understand the natural mysteries of their land. For instance, Canadians are curious why Alberta (“have so much oil”) possesses the giant (and environmentally controversial) oil sands in the northeast of the province, and why the Yukon (“have gold”) contained a wealth so vast that it triggered the Klondike Gold Rush at the end of the 19th century. Prince Edward Island (“have red sand”) is home to the signature red-tinted beaches – caused by the high iron-oxide content in the sandstone bedrock – while Manitoba (“flood”) is burdened with surge-prone rivers like the Assiniboine near Brandon and the Red River near Winnipeg.

Some Canadian cities are known for their weather quirks, too. Easterners likely wonder why Vancouver (“have mild winters”) is blessed with pleasant temperatures all year round, while everyone outside Alberta is trying to figure out what those unique warm winter winds in Calgary (“get chinooks”) are all about. Most of Canada is not particularly known for its seismic activity, so searchers are often curious why Ottawa (“get earthquakes”) tends to experience moderate tremors (like the 5.0 quake in 2010) from time to time.

It is perhaps no surprise that searches about Quebec (“want independence”) focus on the province’s decades-long quest to separate from Canada. But apparently Canadians are also looking to Google to understand whether Newfoundland (“want to separate”) has an independence movement of its own. The Northwest Territories (“split”) is a big place, but we all know that it used to be bigger. On April 1, 1999, the territory of Nunavut was carved off of its eastern half; many Canadians are apparently still trying to figure out why.

In another stumper, most of Saskatchewan (“not change time”) has decided to go it alone by sticking with Daylight Savings Time year round. While this strategy may offer the advantage of not needing to change clocks twice a year, things may get a little bit confusing if you find yourself traveling for a 9am appointment in the city of Lloydminster, the only place in Saskatchewan that does adjust its clocks.

Finally, Canadians use Google to gain insight into what is perhaps the deepest mystery of all: why Ontarians drink milk stored in bags rather than in cartons or jugs. This popular instructional video explains the complex mechanics (and accessories) required to simply pour yourself a glass.

For most locations on our map, we simply used the first autocomplete suggestion after “Why does [place name]“. However, in a few cases, we picked an autocompletion from further down the list if it was particularly unique or representative of that place, and also substituted common contractions (like BC for British Columbia) to solicit more representative completions. Note that for New Brunswick and Northwest Territories, autocomplete changes the search term does to did on its own, and so suggests a historical event.

All of our searches were conducted on www.google.ca, but note that Autocomplete can vary by place and time, so not all of our results may be reproducible where (and when) you are.