My alma mater, Western University, has a reputation as a party school. In 2011, Western famously made Playboy’s list of Top 10 Party Schools in North America, the only Canadian university to achieve the honour. Cited for its rowdy dorm parties and hopping bar scene, Playboy’s stamp of approval has given Western an untouchable social reputation across the country.

A few years on, Maclean’s began surveying students on their social and work habits. Students who participate in the survey self-report how many hours they spend studying and partying in a typical week. Looking at partying data alone, Maclean’s crowned St. Francis Xavier the clear winner —  its students are well ahead of the competition in terms of hours partied — with Western University far down the list.

So what does a deeper look at the data tell us about Western’s reputation as a bastion of hedonistic student life, and how well do other Canadian universities deserve the not-so-coveted label of party school?

The time cost of partying

We first dig into the Maclean’s dataset to examine how long, on average, students at Canadian universities spend partying or hitting the books. When sorting by time spent studying, we find McGill and Waterloo at the top (21.9 and 21 hours per week, respectively), while St. Mary’s and Cape Breton round out the bottom of the list (11.7 and 10.6 hours per week respectively). On the partying front, St. Francis Xavier (7.9 hours) and Bishop’s (7.0 hours) top the list, while Manitoba (1.9 hours) and Simon Fraser (1.8 hours) bring up the rear. 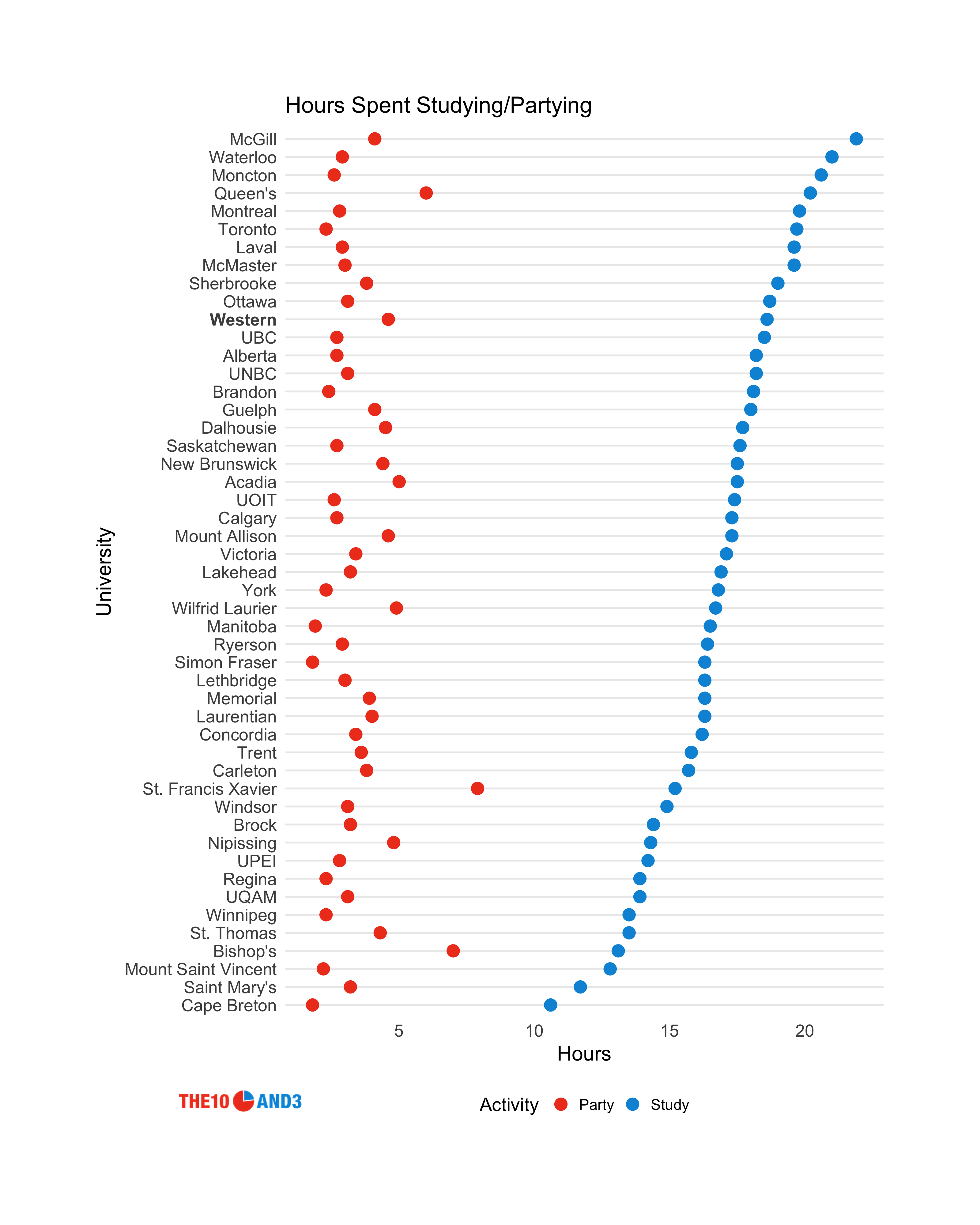 Western students, interestingly, hover near the top of the list for both partying and studying, while Queen’s students are even more extreme, outranking their peers at Western in both studying and partying (while not having the party school label). So what are we to make of these work-hard, party-hard institutions?

The interplay between time spent studying and time spent partying is complex, and we need some sort of currency to understand how the two measures are related. The simple ratio of hours spent studying divided by hours spent partying captures the concept well. You can think of this as buying time to play after the hard work of writings essays and finishing problem sets. 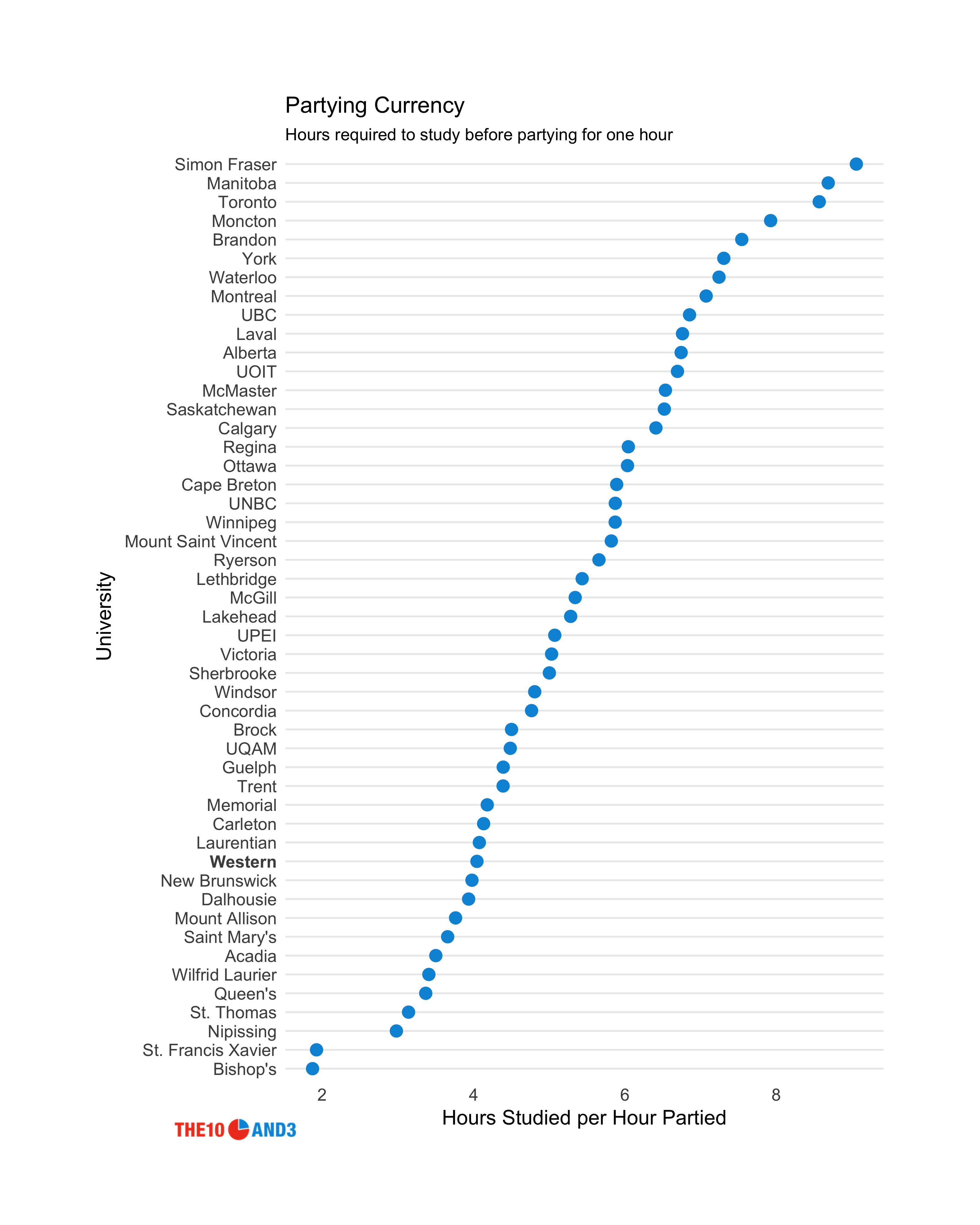 In order to buy one hour of partying, you need a certain number of hours studied.  Want to party twice as long? Well, then you need to work twice as much.  Schools with a lower measure think that their study time buys them a lot of party hours, and so reward themselves after a minimal amount of work. Schools with a higher measure don’t think that their study time entitles them to much party time at all, and therefore feel like they have to put more work in before enjoying a single hour of partying.

Simon Fraser, Toronto, and Waterloo are near the top of the list with 9.0, 8.5, and 7.25 hours spent studying, respectively, before partying for a single hour. That is just as long, if not longer, than a typical work day, and these schools’ reputations for being among the most academically rigorous in the country are at least partially borne out by the numbers.

At the other end, we have two clear standouts, with Bishop’s just edging out St. Francis Xavier as having the most valuable study time. Students at these two universities spend less than 2 hours studying before going out to party for an hour. That’s 30% less studying (per partying hour) than their nearest counterpart, Nipissing, a remarkable 50% less than Western, and nearly 80% less studying than Simon Fraser.

The currency measure is a good way of understanding how valuable students think their study time is, but it still doesn’t tell us the entire story. We can apply some standard k-means clustering techniques in order to divide up the schools into their natural groupings, or clusters. 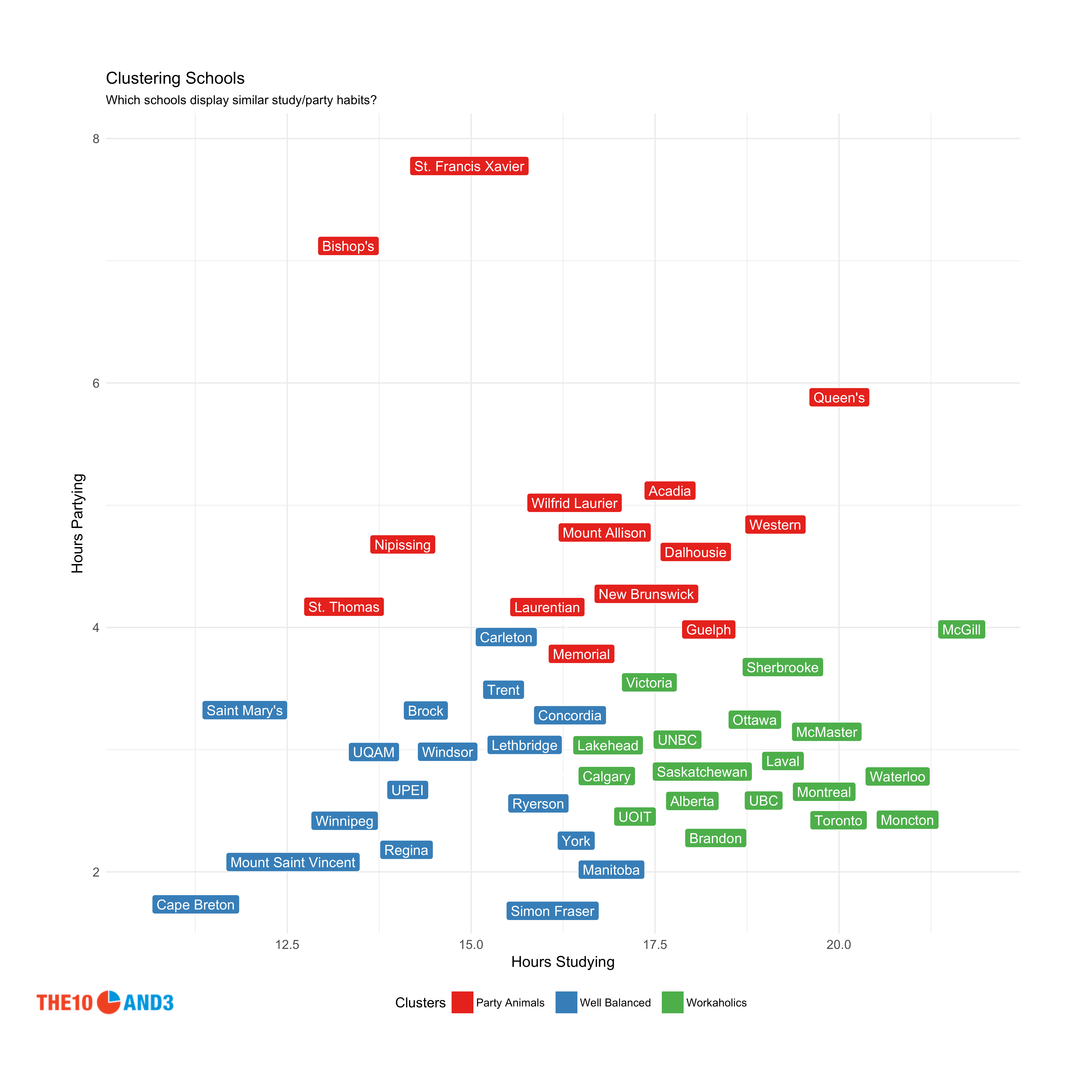 The “workaholics” spend nearly 18.8 hours studying but just 2.9 hours partying on an average week.  These schools include Toronto, Waterloo, and McGill.

The “well-balanced” group clock in at just 14.7 hours of studying and 2.7 hours of partying on an average week.  These schools include Ryerson, Simon Fraser, Brock, and Windsor.

Finally, the “party animals” study around 16.5 hours a week but party 5 hours per week.  These schools include Laurier, Guelph, and Dalhousie.

The clusters seem to reveal a clear pattern on where students are choosing to spend their time. On average, students at every university in Canada will spend roughly 14.5 hours studying and 2.5 hours partying, regardless of their other tendencies. Every school has an extra 4 hour chunk per week that they can spend as they wish, but how they choose to spend those four hours depends on which cluster they belong to. The workaholics put all four of these hours into studying, while the party animals put two hours into studying and the remaining two into partying. The well balanced group seem to put these four hours into some other activity (maybe in the gym or at school club events, or just relaxing).

Where does all this leave the hard-living reputations of universities like Western, St.FX and others? Playboy may have gotten the story partially right; after all, the data does suggest that Western students do belong to the cluster of “party animal” universities in Canada. But they are nowhere near the top of that class, with Bishop’s students edging out those of St.FX when valuing (lots of) partying against (very little) studying.