Last year, we declared Thunder Bay to be the hockey capital of Canada. Season after season, this unassuming, northern Ontario town sends boatloads of its young men into the ranks of the NHL. And the data doesn’t lie — over the past century, no other Canadian city has so consistently churned out hockey players at such a high rate.

But many readers were aghast: how could we ignore the Prairies? In those parts, while some players do come from mid-sized cities like Regina or Red Deer, so many more hail from a vast constellation of tiny towns – with names like Oxbow, Aneroid and Elk Point – that dot the endless prairie landscape. A small town certainly cannot consistently produce NHL-ready players year after year, so it simply has no chance in our analysis when facing larger cities like Thunder Bay. But when you start to analyze all of these small towns aggregated across a larger region, like a province, then you may just realize how dominant the hockey tradition in Canada’s west really is.

Others wondered about the huge influx of players in the NHL born outside of Canada, who now comprise over half of the league. The American invasion was well underway by the early 1980s, with stars like Chris Chelios and Pat LaFontaine contributing a familiar brand of hard-nosed, yet skilled North American hockey. By the late 1980s, the ranks of European and Soviet players in the NHL exploded, bringing with them an elegant game based on skating and puck possession.

We’re here to tell you: while Thunder Bay remains Canada’s best hockey town, Saskatchewan is the world’s undisputed hockey hotbed – a province that has consistently produced more NHL-ready players per capita than any other region in Canada, or on the planet.

To recognize the rich and diverse pedigree of the world’s best hockey players, we built an interactive heatmap showing the birthplace of NHL players from around the world over time, stretching from the league’s early years in 1925 to today. To analyze the heated regional rivalries in North America, we sliced up Canada into provinces and territories, and the United States into states, while players from outside of North America were assigned only to their country. Regions on our map were assigned a colour intensity based on the number of players born there; the higher the number of players relative to the region’s population, the brighter the colour. 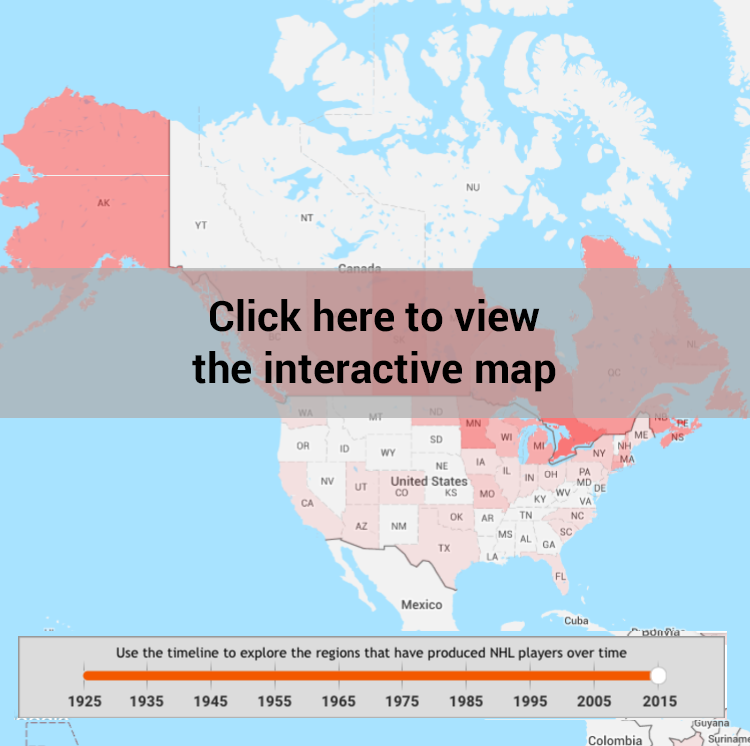 It should come as no surprise that Canadians have dominated the ranks of the NHL since the league’s inception in 1917. In the early years, most players hailed from Ontario and Quebec, but by the 1930s, western Canada started contributing its share of stars, including multiple Hart-trophy winner Eddie Shore and dominant goaltender Tiny Thompson. It took several more decades for every province to be represented in the league (Alex Faulkner was the first from Newfoundland and Labrador, playing as a rookie for the Red Wings in 1962-63).

But looking at the historical data, one trend is absolutely clear: Saskatchewan is far and away the most dominant hockey region in Canada, surpassing every other province and territory according to players per capita, in every decade since the 1950s (last season, Saskatchewan had 3.6 NHL players per 100K residents). For most of the last forty years, over 50 NHL players per season called Saskatchewan home, remarkable for a province whose population has consistently hovered at about 1 million. The only provinces to even come close are neighbours Manitoba and Alberta (2.4 and 1.8 players per 100K residents, respectively), and you may as well just forget about any region outside of Canada.

The United States of Hockey

Minnesota. Michigan. North Dakota. Massachusetts. These northern states, along with a handful of others, form the backbone of the USA’s formidable contribution to the rosters of NHL teams. Minnesota, in particular, has been the most prodigious hockey state for several decades, and represents the birthplace of some of the league’s toughest and most talented players (Dustin Byfuglien, David Backes, Ryan McDonagh, Zach Parise). At the same time, however, Minnesota’s per capita numbers (0.8 per 100K residents last year) are still nowhere near those of Saskatchewan, and in fact have tended to be on par with Canada’s lowest performing province, New Brunswick.

One exciting consequence of the league’s expansion throughout the United States is that even some warmer states are starting to contribute large numbers of players to the NHL. While many of these players soon moved to more frigid climates where they honed their craft — Brooks Orpik (California to New York), Tyler Myers (Texas to Alberta), Sean Couturier (Arizona to New Brunswick) — some, like Oklahoma’s Matt Donovan, learned the basics locally before playing collegiate hockey in more traditional places.

The European and Soviet Invasion

There had always been a small handful of Europe-born players since the early days of the NHL. 1930s-era Blackhawks star Johnny Gottselig was born in present-day Ukraine but cut his teeth playing shinny in Regina; 1949 Calder winner Pentti Lund was born in Finland but credits his childhood in Thunder Bay for turning him into a hockey player.

But it wasn’t until the late 1970s and early 1980s when the ranks of Europeans in the NHL really  exploded. Sweden and Finland led the way, sending stars like Borje Salming, Pelle Eklund and Jari Kurri, who made immediate impacts on their NHL clubs. In a few years, the Czechs and Slovaks started arriving in numbers (prior to the dissolution of Czechoslovakia), but it was the 1989-90 season which stands as a pivotal year in the true internationalization of the NHL: the arrival of the Soviets. That season marked the the first NHL campaigns for Alexander Mogilny (who had defected earlier that year), Igor Larionov, Sergei Makarov and a handful of other Soviet greats. Within a few years, superstars Sergei Federov and Pavel Bure arrived to dazzle Western fans with speed and skill, and the league had changed forever. In the intervening years, while Sweden (0.8 per 100K), Finland (0.6), Czech Republic (0.4) and Slovakia (0.2) continue to lead the way in sending players to the NHL, the rise of the KHL in Russia and eastern Europe has significantly stemmed the tide of Russian-born players to the west, cutting in half the number of Russians on NHL rosters over the past 15 years.

We sliced up the world map by province in Canada, by state in the US, and by country in the rest of the world. For each region (province, state or country), we assigned a color intensity proportional to the number of players per capita whose birthplace was in that region. A player is included in the map for year X if X falls between the start and end of his NHL playing career (even if only 1 NHL game was played).