California’s recently signed immunization law, requiring all incoming students in school or daycare to be vaccinated — with no opportunity for religious or personal belief exemptions — is now among the strictest such laws in the United States. As Canadian students return to the classroom this fall, California’s new legislation has managed to shine a spotlight on Canada’s own surprisingly lax attitudes and regulations toward childhood vaccination.

Only two provinces, Ontario and New Brunswick, require students to be vaccinated before attending school. Even then, both provinces also offer generous religious and so-called “philosophical” exemptions to parents who would prefer that their children not be immunized. Ontario is looking to enact even more stringent requirements, proposing that parents who exercise the philosophical exemption must first complete an educational course led by a public health representative. However, this law is far from a done deal, as it continues to wind its way through the provincial legislature.

While vaccination rates are indeed reasonably high across much of the country, with nearly nine in ten Canadian children vaccinated against diseases like measles, mumps and rubella, a recent Angus Reid survey revealed that attitudes about the efficacy and need for childhood vaccinations remain stubbornly negative in several provinces.

On its face, the Angus Reid survey reveals that Canadians generally recognize the benefits of vaccines both to their own children, and to the population at large. 88% of respondents say that vaccines are effective in preventing diseases for an individual, and 86% view vaccines as effectively preventing diseases in the community as a whole.

A similar pattern emerges when people are asked about how vaccines improve health in the community as a whole, a key motivating factor in legislation like that in California, which explicitly exempts students who cannot be vaccinated for health reasons (and who may be most vulnerable to the disease in the case of an outbreak). A surprising 29% of Quebecers do not view vaccines as an effective way to reduce disease in the community, nearly triple the skepticism rate of any other province. 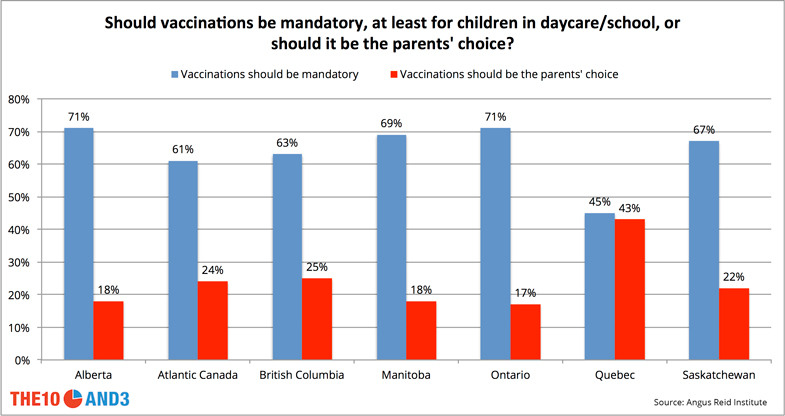 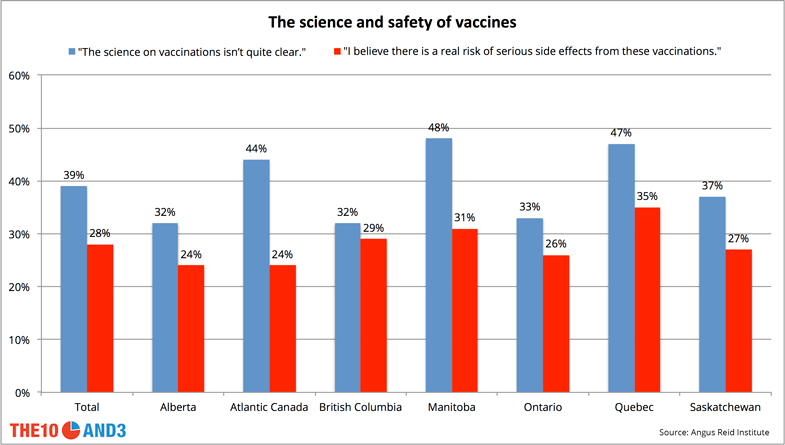 A surprising number of Canadians feel that the science on vaccinations isn’t quite clear (39% total). Respondents in Quebec (48%) and Manitoba (47%) are the most skeptical about the science. Interestingly, skepticism is also negatively correlated with education level: only 27% of university-educated Canadians are leery of the science, while 48% of Canadians with a high school education or less express doubt.

Finally, it seems that those who don’t believe in the science are similarly wary of potential side effects. Over 1 in 3 Quebecers fear serious side effects from vaccinations, followed closely by Manitobans.

So why the skepticism in these regions? The reasons can be hard to pinpoint, but fear stemming from Andrew Wakefield’s discredited 1998 Lancet study linking vaccines to autism still persist in areas, and cultural inertia can be hard to overcome. Given how many adults in Canada, and in particular Quebec, are wary of both the science and the potential side effects, provincial legislatures will no doubt hesitate before enacting stricter rules. As these attitudes persist, we can expect further outbreaks of preventable diseases like the measles, which infected hundreds of Canadians in the most recent large outbreak in 2015.